These concrete tiles, designed by Puig i Cadafalch and Gaudí, cover about 5 million square meters of Barcelona sidewalks.

In the vestibule of Casa Amatller, on the Paseo de Gràcia, the streets are paved with the cement tiles of Josep Puig i Cadafalch. Their signature design, featuring a flower with four petals, is reminiscent of the flower-shaped concrete tiles that line the sidewalks of Barcelona. Even so, according to Danae Esparza, industrial designer, Master of Urban Design, and author of the thesis “The Barcelona Model of Public Space and Urban Design,” the tiles of Casa Amatller are not the origin of the city’s trademark sidewalk tile: “If you look closely, you’ll see that there are subtle differences between the two. While the tiles in Casa Amatller are made of natural stone, and the design is created in bas-relief, the sidewalk tiles are made of hydraulic cement, and the bas-relief is found only in the outline of the flower,” the designer points out.

In 1906, the city standardized five different tile models, each featuring a unique design: one with a flower, one with a skull, one with concentric circles, one with four panels and four circles, and finally, one with four panels, the one that’s most commonly seen on the streets of Barcelona. Today, while many other sidewalk tiles are used, including ones made of granite or concrete, from among the first set of five designs only the flower and four-panel models are used; they are considered, respectively, the most historical and the most functional. In total, the tiles cover about 5 million square meters of Barcelona sidewalks.

The concrete tile, measuring 20x20 cm, was installed to address the mud problems the city faced in the early 20th century. Esparza explains: “The town of the Eixample started off somewhat haphazardly. Each resident paved the 2.5 meters in front of the house whatever material the City Hall authorized; asphalt, natural stone, or cement. By 1906, the sidewalks were so chaotic, and their was so much mud, that the city acquired the nickname Can Fanga“ (mud house in English). The comic strips in the Esquella de la Torratxa illustrated the situation perfectly, depicting the city as sunken in silt. Cement pavement would mean a definitive end to the problem of sludge.

The Paseo de Gràcia, for its part, features another model of tile, designed in 1904 by Gaudí, and first conceived for the interiors of the masterful Casa Battló. Their design is a hallmark of the architect’s ingenuity, each piece encapsulating an infinite mosaic of marine elements in one single, elegant slab of rock. 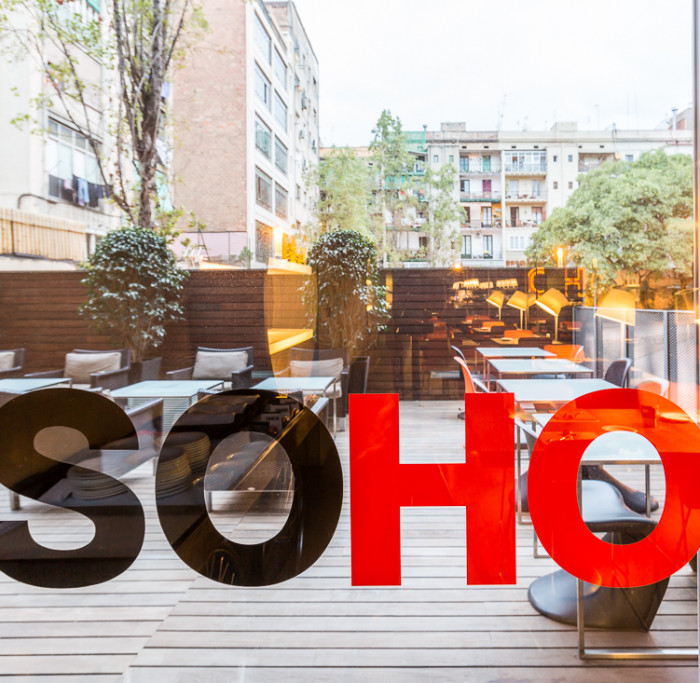 Pop design in the Eixample